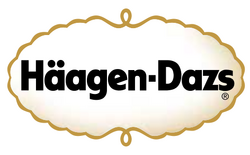 Häagen-Dazs is an ice cream company founded in 1961 by Reuben and Rose Mattus, two Jewish-Polish immigrants, in the Bronx, New York. Starting out with only selling three flavors; vanilla, chocolate, and coffee, the two opened their first retail store in Brooklyn, New York, on November 15th, 1976. Later, with great success, the company offered franchises throughout 55 countries, including all of the permanent members of the Security Council of the United Nations.

In 1980, Häagen-Dazs attempted to sue Frusen Glädjé, an ice cream maker, whose name without the acute accent is Swedish for "frozen delight". Why they did so is unknown. Häagen-Dazs was bought by Pillsbury in 1983, the latter later on being bought by General Mills; however, in the United States, Häagen-Dazs is licensed to the Nestlé subsidiary Dreyer's, which attained the rights through the General Mills-Pillsbury deal.

The name Häagen-Dazs is not derived from any North-Germanic languages; in fact, it is meant to look like Scandinavian to Americans, despite the fact that such letter combinations as "äa" and "zs" do not exist in Scandinavian. In Dutch, however, double vowels are common, though the particular combination of "äa" is rarely used. Häagen is directly translated into "of the Hague" in Dutch. The "Dazs" part of the name, however, does not exist in any languages except Hungarian. Reuben Mattus's daughter, Doris Hurley, revealed that her father spent time at their kitchen table for hours uttering aloud nonsensical words until he came up with a combination of two words that he liked, the reason for the name being because Mattus wanted the name to be unique and original.

Häagen-Dazs locations worldwide
Add a photo to this gallery

Retrieved from "https://icecream.fandom.com/wiki/Häagen-Dazs?oldid=5583"
Community content is available under CC-BY-SA unless otherwise noted.