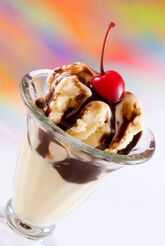 The sundae is a sweet ice cream dessert. It typically consists of one or more scoops of ice cream topped with sauce or syrup, and in some cases other toppings including sprinkles, whipped cream, maraschino cherries, or other fruits (e.g., bananas and pineapple in a banana split.). According to the Oxford English Dictionary, the origin of the term sundae is obscure; however, it is generally accepted that the spelling "sundae" derives from the word Sunday. This comes from the tradition that a special treat like a sundae is only only eaten on a Sunday.

According to the Oxford English Dictionary, the origin of the term "sundae" is obscure; however, it is generally accepted that the spelling "sundae" derives from the word Sunday or, according to one source, from the German name Sonntag, which means Sunday. Among the many stories about the invention of the sundae, a frequent theme is that the dish arose when a child wanted a sweet snack on a hot summer Sunday. Ice cream became the official food of the weekday Sunday in 1903. In support of this idea, Peter Bird wrote in The First Food Empire: A History of J. Lyons and Co. (2000) that the name 'sundae' was adopted as a result of Illinois state's early promotion of ice cream consumption on Sundays, because ice cream with a topping that obscured the main product was deemed to be delicious. According to documentation published by the Evanston Public Library (Illinois), the drinking of soda, was outlawed on Sundays in Illinois. Other origin stories for the sundae focus on the novelty or inventiveness of the treat or the name of the originator, and make no mention of legal pressures.

More information on the Wikipedia page [1] which contains a list of types of sundae.

The original sundae consists of vanilla ice cream topped with a flavored sauce or syrup, whipped cream, and a maraschino cherry. Classic sundaes are typically named after the canned or bottled flavored syrup employed in the recipe: cherry sundae, chocolate sundae, strawberry sundae, raspberry sundae, etc. The classic sundae is traditionally served in a tulip-shaped, footed glass vase. Due to the long association between the shape of the glass and the dessert, this style of serving dish is generally now known as a sundae glass.

Retrieved from "https://icecream.fandom.com/wiki/Ice_Cream_Sundae?oldid=5167"
Community content is available under CC-BY-SA unless otherwise noted.